What turbine works best offshore? Is it the horizontal? or the vertical-axis mechanism? That is the question that is being re-evaluated by Sandia National Laboratories’ wind energy research. Sandia Laboratory is re-examining vertical axis wind turbines (VAWT) who they think can solve the problems that horizontal axis wind turbines (HAWT) is facing offshore. 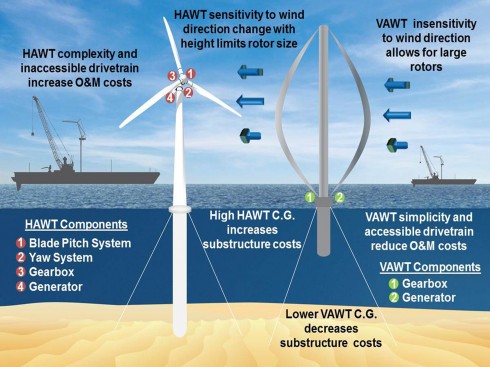 Offshore turbines are different on land turbines, due to installation and operational challenges. Sandia Labs, in their recent press announcement. Three significant advantages also where shown in favor of VAWTs to be more efficient.-lower turbine center of gravity, meaning improved stability and lower gravitational fatigue loads;

Sandia is also conducting research for advanced rotor technology for offshore wind power generation this year under Department of Energy.

However, VAWT has a cyclic loading problems, unlike HAWTS that can maintain steady torque if the wind remains steady. VAWT has two pulses based on the blade if it is for upwind or downwind that causes the turbine to have unsteady loading. New rotor designs are evaluated however to fill this dilemma.

The first two years of the program involve concept designs running it on modelling software and narrowing those to the most workable design. The next three years will be focused on the chosen design. Testing it on extreme conditions and on how to turbine to survive offshore environment.