This is the “Poor Little Fishbowl Sink”, every time you use this sink, water from the fishbowl drains, putting the poor little fish’s life at risk. It is a very clever way of reminding us that our wasteful actions may directly affect other creatures, including humans, with parts of the world where access to clean water is a matter of life or death. 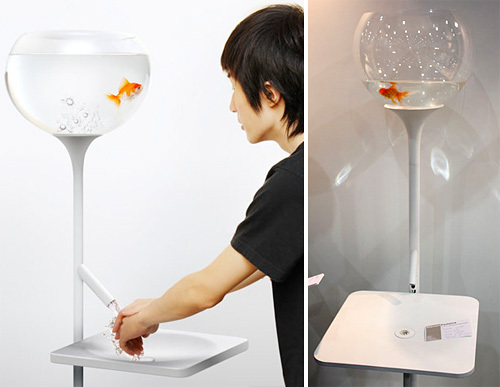 At the first look, this is an extreme method to conserve water. But actually it isn’t, the fish will never die.

It is clever design offering an emotional way to persuade people to think about saving water. Making consumption and conservation more visual and tangible.

Earth is covered by 70% water, but that’s just 1/1000th of the Earth’s volume: By volume, the Earth is about 1 trillion or 1,000 billion cubic kilometers. All of the earth’s water comes in at a thousand times smaller, in a sphere with a volume of 1.4 billion cubic kilometers and about 1,400 kilometers in diameter – that’s about the length of Madagascar - See more at: 5 Facts you should know about water