Yesterday, the Arctic sea ice has reached its lowest point in recorded history. A grim warning that climate change is happening faster than predicted. In 2011, A polar bear swam continuously for over nine days, covering 687km - 232 hours, as it sought for hunting grounds. This left scientists in awe, that an animal spending most of its time on the ice surface could swim constantly in very cold water. The Arctic needs to be protected. Sign now. 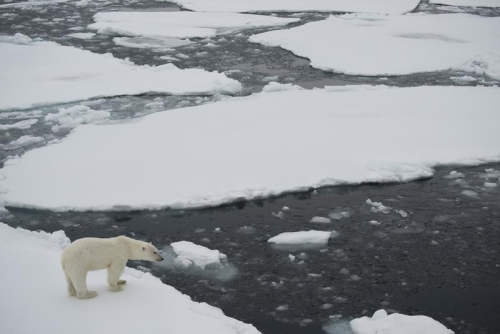 A very sad record was broken yesterday when the Arctic ice reached its lowest point ever recorded.

This is terrible news. Yet, oil companies, Shell first among them, are seeing this not as a call to stop climate change, but as a business opportunity. As the ice melts, they see a possibility to start drilling for oil in places that are opening up. Shell tried- and thankfully failed - to drill in Alaska this year. But they will be back next year, and as the fossil fuels they drill for are burnt, climate change is accelerated

The Melting Arctic is Under Threat from Oil Drilling, Industrial Fishing And Conflict. Despite the obvious visible effects of climate change caused by these Industries, they still are still pushing through with there plans on the Arctic. Greenpeace is on an active movement taking action against these plans and the companies behind it. But in order to succeed they need our support. You can volunteer to help on their movement or simply Sign the petition and demand our world leaders to declare a global sanctuary around the north pole.