SCOTLAND - Harvesting energy under sea level is viewed as a potential renewable energy source off to the coast of Northern Scotland. It was a few years after Norway built it’s 10 megawatt wind turbine, Scottish Power Renewables faced it on a different direction. “We’re very pleased with the initial results and we’ve operated at full power already,” - Alan Mortimer from Scottish Power Renewables. HS1000 sub-sea turbine is a 30 meter turbine that is installed in the Scottish sea bed. It is found that one sub-sea turbine can produce up to 1 megawatt of renewable energy, enough to power up 500 homes.

Another testing is conducted according to Scottish Power Renewables and if test goes according to plan, They will proceed on a fleet. The turbines are manufactured by Andritz Hydro Hammerfest and will be installed at the west cost of Scotland.

Though sub-sea turbines are already operational in UK, the Islay (southernmost island of the Inner Hebrides of Scotland) turbines would be the first to operate a group of it’s kind. As plan goes, they will install 10 turbines that can power 5,000 homes. 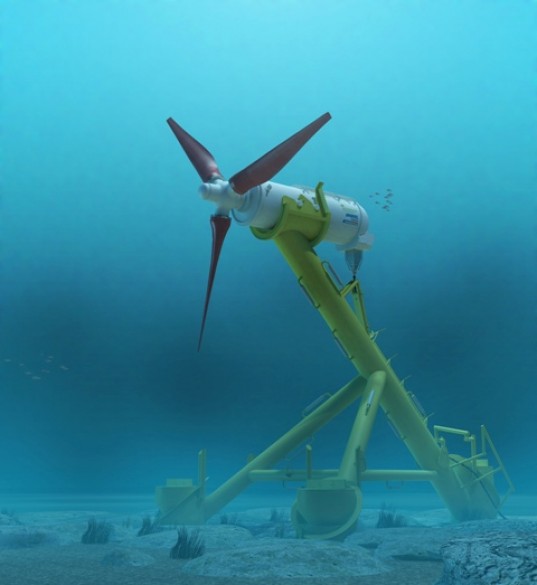 Unlike offshore turbines, sub-sea turbines are hidden from view, the reason why some environmentalist criticized the project to be harmful to marine resources. However, Mortimer contends that the turbine’s propellers move slow, the impact on marine life is minimal.

Scottish Power is also planning to lease for the seabed where the tidal farm will be built. However, the cost remains to be their main dilemma. The project is expected to cost £70 million ($110 million).

According to Ocean Energy Council, the power that will be generated by the Islay turbines (10 megawatts) is 100 times more than the power given by nuclear plants.

Scottish Power believes that these challenges are unavoidable in innovating new technologies and efficiencies as industry develops.

“The estimate for the UK in terms of wave and tidal is that it could eventually produce in excess of 10% of the country’s electricity requirements,” -Mortimer

“That’s definitely big enough to make it of interest for us to pursue it.” -Mortimer