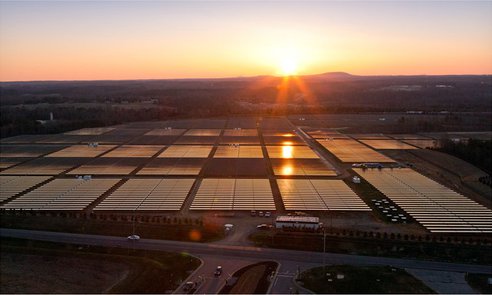 In 2012, we completed construction on the nation’s largest end user–owned, onsite solar photovoltaic array on land surrounding the data center. This 100-acre, 20-megawatt (MW) facility has an annual production capacity of 42 million kWh of clean, low-carbon, renewable energy. And we’re currently building a second 20-MW solar photovoltaic facility on nearby land that should be operational in late 2013. In addition, we’ve built an onsite 10-MW fuel cell installation that uses directed biogas and provides more than 83 million kWh of 24/7 baseload renewable energy annually — it’s the largest non-utility fuel cell installation operating anywhere in the country. All told, Apple will be producing enough onsite renewable energy — 167 million kWh — to power the equivalent of 17,600 homes for one year.* These power sources are connected to the local energy grid and not only displace other dirtier forms of electricity that otherwise would have been used, but their environmental benefits are used only by Apple and are in addition to any locally mandated renewable energy requirements. - Apple